The Center for Human Dignity in Bioethics, Health and the Holocaust at Misericordia University will commemorate International Holocaust Remembrance Day with a special program and screening of the documentary, “Eva: A-7063,” on Monday, Jan. 27 at 7 p.m. in Lemmond Theater in Walsh Hall. 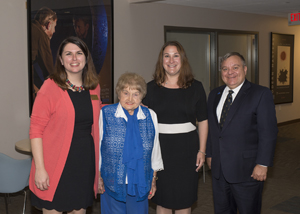 The documentary chronicles the life of Holocaust survivor and forgiveness advocate Eva Moses Kor, and also includes the third annual Pledge to Preserve Human Dignity and reflections by members of the Misericordia community who knew and worked with Kor, who died in July 2019.

The 90-minute documentary by Ted Green, Mika Brown and WFYI, a Public Broadcasting Service station in Indianapolis, Indiana, tells the story of Kor, who with her twin sister, Miriam, survived the genetic experiments performed by Dr. Josef Mengele at the Auschwitz Concentration Camp. The two were rescued when the Soviet Army discovered about 200 children alive during the liberation of the camp on Jan. 27, 1945.

Kor came to the United States and subsequently founded the CANDLES Holocaust Museum and Education Center in Terre Haute, Indiana in 1995, as part of her mission to prevent prejudice and hatred through education about the Holocaust and promotion of forgiveness.

In 2017, Kor spoke at Misericordia University and shared details of her time in captivity, her experiences as a medical human guinea pig, and her efforts to take back control of her life by meeting with the German doctors who carried out the medical experimentations to say she forgave them for the atrocities. 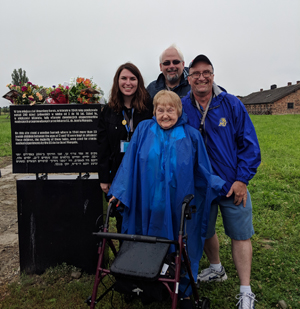 Stacy Gallin, D.M.H., director of the Center for Human Dignity in Bioethics, Health and the Holocaust at Misericordia University, and three members of the faculty, Amanda Caleb, Ph.D., director of the Medical and Health Humanities Program and associate professor of English; Thomas Hajkowski, Ph.D., associate professor of history, and Joseph Cipriani, Ed.D., O.T.R./L., professor of occupational therapy, accompanied Kor on a trip to Poland in 2018 and visited many of the buildings and sites where she was held, including the train platform where she and her sister were taken from their mother by Nazi soldiers. Drs. Caleb, Hajkowski and Cipriani will reflect on their time spent with her and the privilege of seeing the sights through her eyes during the program.

The film recorded Kor on a trip to Auschwitz, in her hometown in Romania, and in Israel, Germany and London, where she was part of a CNN International special on survivors. Kor died on July 4, 2019 during a trip to Kraków, Poland.

Participants at the screening will have the opportunity to sign the “Pledge to Preserve Human Dignity in Health Care,” and join an international movement to “uphold the values of dignity, equality and justice within health care.” The pledge was launched by the center in 2018 and has been signed by more than 1,175 students, health care professionals and concerned citizens representing 27 states, Washington, D.C., and 39 foreign countries, including Argentina, Australia, Brazil, China, Columbia, Croatia, Italy, Denmark, France, Mongolia, South Africa and Zambia.

Since the launch, Dr. Gallin has taken the pledge on the road and presented it to audiences in a variety of settings, including the Jagiellonian University in Kraków, Poland; the Center for Bioethics and Humanities at the University of Colorado, and The Fashion Institute of Technology’s Holocaust Commemoration Program in New York City. Most recently, Dr. Gallin presented the pledge in Dortmund, Germany on the 81st anniversary of Kristallnacht.

“The date of the film screening is the date of International Holocaust Remembrance Day, which was chosen to commemorate the liberation of Auschwitz, which marks its 75th anniversary this year,” said Dr. Gallin. “We chose to honor Eva not only because of her connection to Misericordia, but also because of her very personal connection to Auschwitz.”

Founded in 2017, the Center for Human Dignity in Bioethics, Health and the Holocaust is the only academic center of its kind in the U.S. It fosters a deeper understanding of medical practices and their ethical ramifications, set against the backdrop of the Holocaust, and builds on the teachings offered in Misericordia University’s Medical and Health Humanities Program.

For more information about the event or the Center for Human Dignity, please contact Dr. Gallin at sgallin@misericordia.edu or visit www.misericordia.edu/humandignity.