<Back to News
The Modernistics bringing jazz and tap classics to campus on Oct. 17 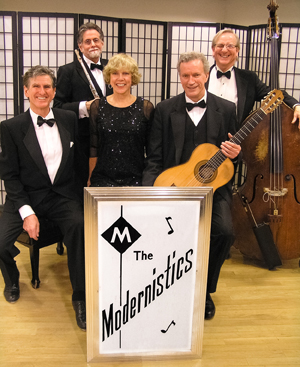 The Boston-based jazz quintet, The Modernistics, will bring an exhilarating evening of tap dance and classics from the Great American Songbook to Misericordia University’s Lemmond Theater in Walsh Hall on Thursday, Oct. 17, at 7:30 p.m.

Offering the song stylings of Irving Berlin, Harold Arlen, Dorothy Fields, Hoagy Carmichael, Duke Ellington and other music masters, the singing and tap-dancing team of Ted and Pamela Powers will be accompanied by Peter H. Bloom on flute, Mark Leighton on guitar and Dave Zox on double-bass. The acclaimed group will provide an array of songs and high-energy tap dance numbers, such as “Sunny Side of the Street,” “Paper Moon,” “Bye-Bye Blackbird,” “Georgia on My Mind,” and “It Don’t Mean A Thing If It Ain’t Got That Swing,” along with bebop tunes by Dexter Gordon and Bud Powell.

The Modernistics have performed at venues across the Northeast, including the Ocean Park Music Festival in Maryland, the Medallion Opera House and the Tillotson Center in New Hampshire, and Colby College in Maine. The group’s members have taught and performed extensively in the U.S. and abroad.

Bloom has been praised for his “hip, jazzy flute work” on Allaboutjazz.com, having performed in North America, Europe, Asia, Australia and New Zealand. He is featured on 45 CDs, and has shared the stage with Ricky Ford, Charles Neville, Sheila Jordan, Jaki Byard and other jazz greats. He is also a veteran of the illustrious Aardvark Jazz Orchestra, now in its 47th season.

Leighton is acclaimed as a jazz and classical guitarist, performs widely, and serves on the faculties of Colby College and Eastern Nazarene College in Quincy, Massachusetts. Ted Powers’ career in jazz, blues, and pop includes several years as a solo performer in the south of France and tap-dancing in the U.S. with the legendary Jimmy “Sir Slyde” Mitchell. Pamela Powers has performed and taught in the U.S., Germany and England, and has studied with Harold Nicholas of the iconic Nicholas Brothers and with Broadway choreographer Charles Hughes. Zox has performed with the Glenn Miller Orchestra, the Artie Shaw Band, Herb Reed and the Platters, Phil Woods and other notables.

Tickets are $10 for premium seating, $8 for general admission and free to Misericordia students, faculty and staff. Tickets are available at the door or by visiting www.misericordia.edu/modernistics. For additional information, please call the Misericordia University Box Office at 570-674-6719.